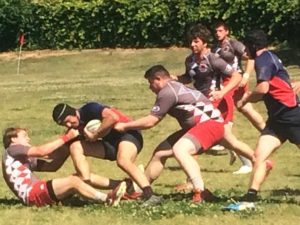 This has been an exceptional year for Chico Rugby! All 4 teams that made playoffs are still going strong and looking to bring home their respective championships!

The Rugby Nor Cal Playoffs started on the weekend of April 22nd with the Chico Wild Oaks Girls High School team taking on the Berkeley Red Hawk Ladies in Chico. Tough match for the first 10 minutes, before the Wild oaks scored their first of many tries enroot to a 75-0.

Also on the day the Black Oak JV boys were pitted against a scrappy Elk Grove United Rugby Club. This was a back and forth match. The Black Oaks jumped out to a 30-point lead before Elk Grove woke up and almost got the match within striking distance, before the Black Oak backs put a try or 2 on the board to secure the win.

The undefeated, Chico Black Oak Varsity boys have an extra step in their march to the Championship match. It all started with their quarterfinal opponent Vacaville Black Dog Rugby on April 22nd. This is a team that Chico has not beat in their early existence. The Vacaville squad is well coached by Brett Fortney, who, coincidently, played all 5 years of his college career at Chico State for the Black Oak’s coach, Mitch Jagoe. Vacaville came out and put up a couple tries but the Black Oaks responded, outscoring Vacaville and taking the W, 48-14 to remain undefeated!! This earned the right to go to Fresno to take on Buchanan Rugby Club.

Fast forwarding to Saturday April 29th, the Black Oaks where off to Fresno to take on an undefeated Buchanan Rugby Club who was very confident!! Our boys came out flat and went down 7-0 in the first 3 minutes. The next 6 minutes had the Black Oaks turning the ball over 6 times, but luckily never broke in our defensive structure. The boys settled down and put up 36 unanswered points! The back line, led by the direction of flyhalf Bryce Jagoe and fullback Jamarquez Abram’s 4 tries was just too much for the home team. The rest of the backs, centers Dino McKellar, KJ Martin, Efrain Perez and a collaborate effort on the wings by George Back, Gabe Galvan, Avery Herbert and John Mathis-Paoli kept the Buchanan team guessing where we were going to go next! The forwards, anchored by 8 man Devin Berger and Luis Alvarez dominated the match. With scrum halves Alex Saise and Nik White running the forwards, they ran tight off the break downs, wide and basically all over! Flankers Tanner Topp and Richard Tyner, along with lock Azul Gonzales and hooker Sutter Sullwold, continue to impress their coaches with their relentless pursuit of the ball both on offense and defense. In his first start of the season, Jeff Peterson played very inspired rugby filling in for Tyler Winters who had to move to prop due to injuries by other teammates. The Black Oak other scores were by flanker Tanner Topp, Bryce Jagoe and Alex Saise who made 3 of his conversion kicks to round out the 36 points.

With the win, the Black Oak varsity boys will play for the Cup Championship of Rugby Nor Cal. Their opponent will be Bellarmine College Prep out of San Jose, who just got a big win over Cougar Rugby from Sacramento. The Cup Championship will be played in Stockton on May 6th as well!

In addition to the Chico Oaks High School teams having so much success, the men’s club, the Mighty Oaks have been doing damage as well. With the most impressive season the Mighty Oaks have had since their National Championship season in 2002, the Oaks are undefeated and Nor Cal champs with a big win over an always TOUGH Colusa County Rugby Club last Saturday in San Francisco. Next up for the Oaks men is the Pacific North West Eugene Stags in the first round of the National Sweet 16. Luckily for the Oaks, this match is back in the bay area, on Treasure Island. Their kickoff is set at noon on May 6th. Good luck boys! Keep rolling!

We want to send a HUGE GOOD LUCK to all the Chico Oaks Rugby Clubs playing for the Championships next weekend!!!