Save the date for the annual Chico Rugby Alumni weekend. This years date will be October 11 – 13 2019 and is less than 30 days away! The match will be FREE to all participants and spectators. If you want to take part in the Friday night warm up or the post match social, please take a moment to Signup

If you are unable to attend in person this year, show your support by donating and by forwarding this newsletter on to friends and family of Chico Rugby.

Questions and feedback are always welcome. Feel free to email us contact@chicorugby.org.

In a letter addressed to the Chico Rugby Foundation and the CSRABA, the university has demanded that the small, non-profit organization and it’s subsidiary, whose sole purpose is to promote rugby in the community and strengthen and support clubs on campus cease and desist any reference to the university. A copy of the letter can be seen here.

Lou Stanfill, Executive Director of Rugby NorCal made the trip to Chico to pass on some good fortune to those members of our Chico Oaks Rugby family who lost their homes, and so much more in the devastating Camp Fire in Paradise and Butte County. 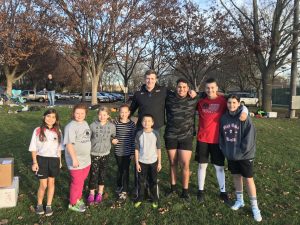 Through the generous donations from our extended rugby family, Rugby NorCal partnered with Canterbury of New Zealand, and was able to provide 8 of our youth rugby players with new kit from Canterbury! Their new kit included boots, a new hoodie, jersey, t-shirt, rugby shorts and more. Such an amazing effort on behalf of Lou Stanfill and Christina Gein of Rugby NorCal! Thank you both so much!

To our wide spread rugby family, we can’t thank you enough as well for your generous donations that will allow all these young ruggers to return to the pitch with the proper gear!

Much love and happiness to you all during this holiday season! 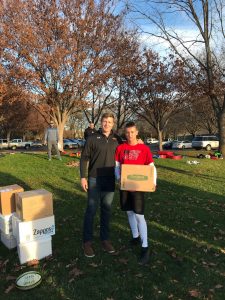 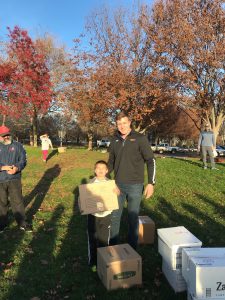 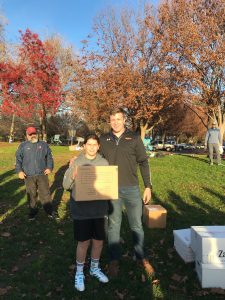 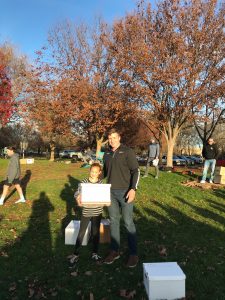 RUGBY FOR ALL!  Join us Saturday November, 3rd at PV High School in Chico Ca. This will be our 8th annual free rugby clinic. Boys and Girls all levels of play are welcome. Ages 7yrs – 18ys. Click here for more details and to 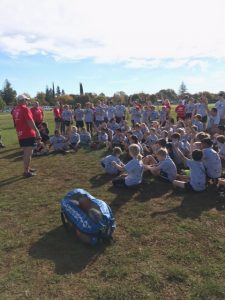 register to secure you free T-Shirt!! 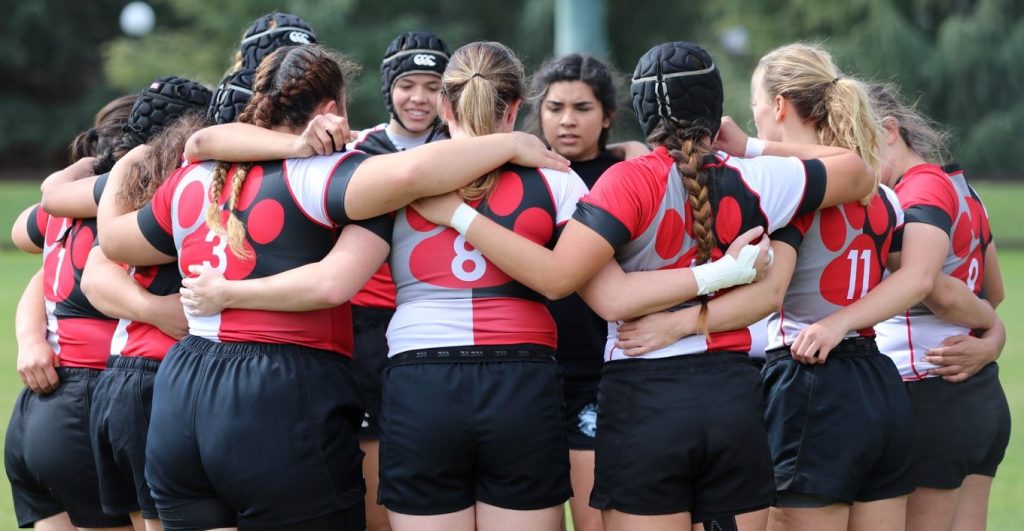 The Chico State Women’s Rugby Club took on Stanford in their last league match on Saturday, March 3rd. With a 55-0 shutout at Stanford’s home pitch, the Chico women were more than ecstatic, as players rushed the pitch as the final whistle blew.

Within a minute of the match beginning, Fullback Darby McFall scored her first try of the match. With a solid defensive line, and active pressure against stanfords forward pack, Chico brought home three more tries during the first half. One scored by Inside Centre Hannah Westfall, and two scored by Outside Centre Stefani Bergerhouse. Ending the first half at 24-0, with two conversions missed, Chico’s confidence was high. 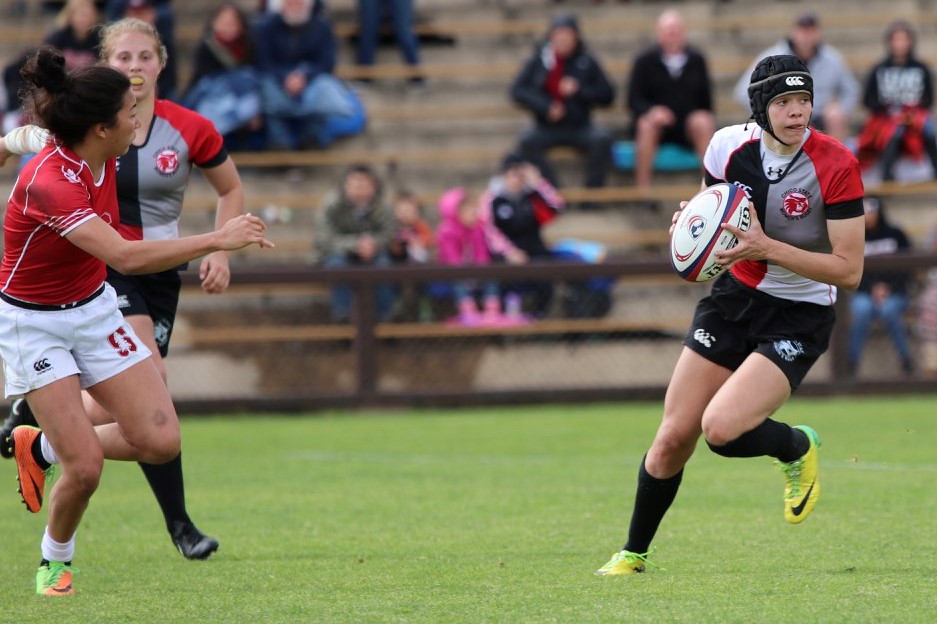 Bergerhouse would score shortly after Westfall, at the start of the second half, as both McFall and Westfall would go on to score twice during the half, giving the trio each a hat trick. Chico State finally accomplished their goal of a shutout, as t

hey rounded out the match 55-0. Winning their league undefeated, Chico remains first in the nation, and will continue play into the postseason.

“The last time we had an undefeated season was in 2001” said Coach Mary Triantafyllou, as her team gathered around her. Teary-eyed players grabbed a hold of each other as they reviewed their last league game, talking about what the postseason may hold for them. Chico State is on a road to a national championship, going undefeated like the national 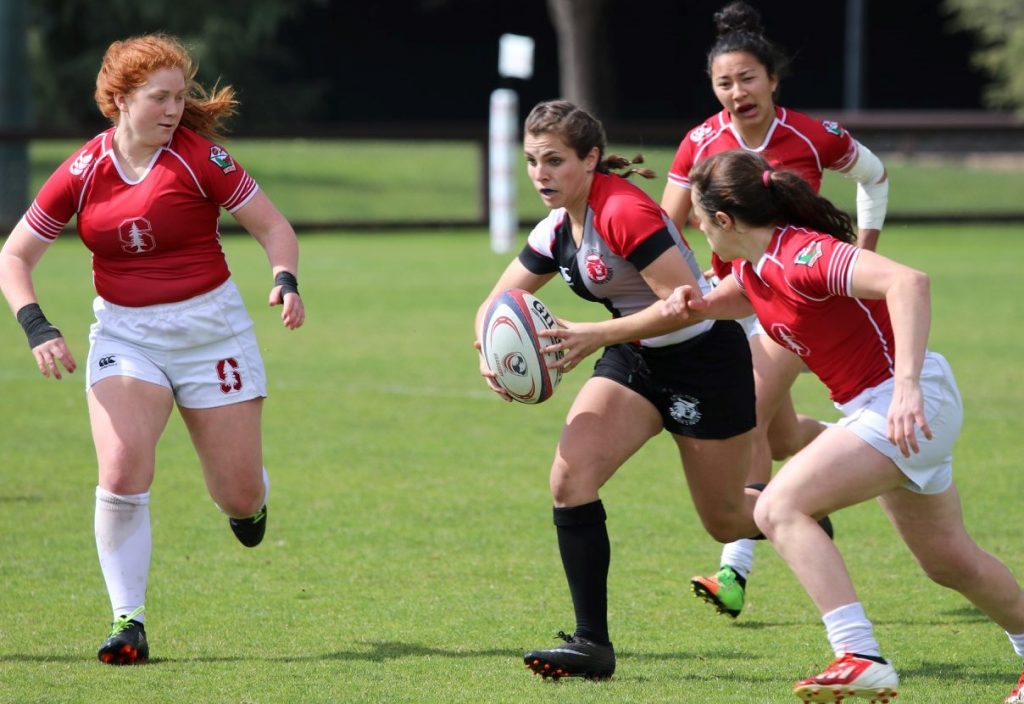 Chico has played an aggressive, high paced game this past season, and their results truly show how hard they’ve worked. Winning an undefeated season is no small feat, as the team can attest to. From morning conditionings to late night practices, this team has worked tirelessly to get to where they are, adding to the story of their jersey, and building up the legacy of the Chico State Women’s Rugby Club.

Chico State played UC Berkeley during Berkeley’s double header, Sunday, February 18th, taking another win at 50-7. This is Chico’s fifth win of the season, as chico begins to play each team in their league a second time.

With a harsh wind facing them, Full Back Darby McFall scored three points off a penalty kick at the start of the match. Morelia Ayala scored shortly after McFall, giving the girls a solid lead, as first year Prop Rebecca Kilmartin scored a double, with two tries during the first half. Chico played with a killer pace, and lead the match with 36 points at the half.

Cal scored during the second half, after Mcfall’s third try,  bringing the score to 43-7. Shortly after, Wing,  Alyssa Pena, scored the last try of the match, rounding out the Wildcats to an even 50 points at the end of the match.

Chico will host their own double header starting the weekend of Saturday, February 24th, starting with their second game against Davis this season. After Davis, Chico will play Humboldt on Sunday, February 25th. Both games will be played at home, at the Chico State Rugby Pitch on campus, with an 11 a.m. kickoff for both matches.

Chico State Women’s Rugby won 74 to 7 on Saturday, February 10th, over Humboldt State, advancing further into the start of the season undefeated.

Chico State is adding another game to their winning streak with their latest match against CSU, Humboldt. The team won with a total of 12 tries scored over Humboldt, giving them their fourth win of the season on Saturday.

In a spectacular show of Chico rugby, senior fullback Darby McFall scored the first try within minutes of the start of the match. Chico scored another seven tries within the first half, missing three conversions. With the score at 50-0 at half, Humboldt scored off a quick tap, throwing off their opposing team with an unexpected change of pace.

Undeterred, sophomore centre Hannah Westfall brought the game back up, scoring shortly after Humboldt, making her third try of the game. Westfall was not the only player to see multiple tries this game, as Mcfall, and sophomore lock, Jennifer Brissenden, both went on to score twice this match, adding to the final score of 74-7.

Chico has successfully played and won against every team in their league so far, topping their previous highest scoring match against UC Berkley, at 65-7. Chico will play Berkley again in their next match, Sunday, February 18th, in Berkley’s double header. 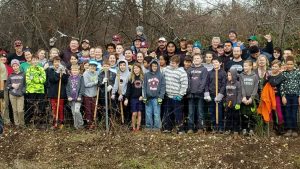 On Saturday, the Chico Rugby Foundation, consisting of families and ruggers from Chico Oaks Youth, Chico State Women and Chico Mighty Oaks Rugby Clubs spent the day with the City of Chico’s Parks Division Crew completing a major clean up project at Teichert Ponds near Kohl’s. With over 60 volunteers we were able to remove a large area of overgrown black berry brush as well as a large olive tree, which was all being used as cover for multiple homeless camps. The foundation is proud of the work we do in the community and is looking forward to the next time. If you or your group has any opportunities please feel free to reach out to us. 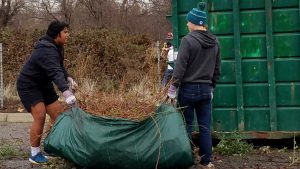 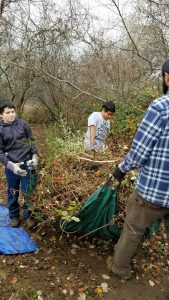 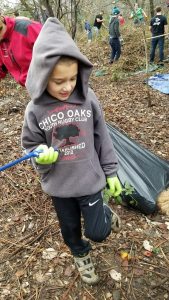 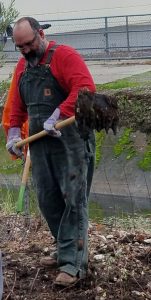 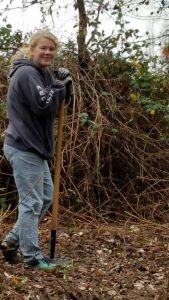 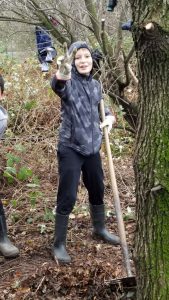 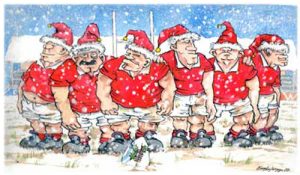 This Saturday, November 11th, will mark Chico Rugby’s 21st Annual Holiday Classic Rugby Tournament. This tournament is the longest running rugby tournament on the West Coast. (not 100% confirmed, but challenge anyone to correct?)

This year’s event will be held at Pleasant Valley High School. The first-round matches will kick off bright and early at 9:00am! There will be 8 of the top men’ teams in Northern California and 4 women’s teams that would give anyone a run for their money. Highlighted by the Chico State Women, nationally ranked each year, forever!!!

It’s going to be a great day of rugby!! In addition, we will be honoring our countries veterans as this Saturday is also Veteran’s Day. This year’s tournament shirts, always a hit, will have a special Veteran’s day theme, so come out pick up a shirt and watch some great rugby!!!

We look forward to seeing you all Saturday!!!

We are excited to announce our annual FREE Youth Rugby Clinic. Please pre-register and guarantee you free t-shirt! Day of registration is available but t-shirts will be first come first serve. Hope to see you there!
chicorugby.org/free-youth-rugby-clinic/ ...

We want to give a BIG THANK YOU to all of you who came out and supported our organization. We had so much fun and can't wait to see you all next year! If you missed our slide show during the event check it out now! ...

This video is about Wheels, WIne & Ribs

Check it out!!!We want to give a huge shout out to 95.1 THE MIX for their generous support and sponsorship of our 2018 Wheels, Wine & Ribs event this Saturday, May 12th. Tune in tomorrow morning for the live interview with our very own Mitch Jagoe at 8:50AM!! If you haven't already got your tickets hurry and get them soon! You don't want to miss it! www.chicorugby.org ...

Chico Mighty Oaks 55- Sac Blackhawks 19. Nice win for our Men’s club today! Some of our Black Oak Alum on the pitch!! ...