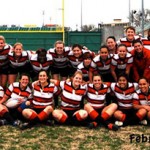 The Chico State Women’s season came to end in the first round of the USA Rugby National Championship Competition. It was good to be back in the National Competition having missed out the last two years. We are still suffering the effects of not having a rookie class in 2010, but some of the effects were offset by the rookie class this season. While the season started out a little slow finishing 2-3 in the regular season, the team was able to bring it together to capture the Pacific Mountain Conference’s 6th and final seed to the National Competition. Having taken 4th in the newly formed Pacific Mountain North conference, we needed to compete against UC Davis (Pacific Mountain North #3), UCSB (Pacific Mountain South #2) and Colorado State (Pacific Mountain East #3) to win the 6th seed. After beating UCSB and narrowly edgingColoradoState, we booked our ticket back into the Sweet 16 Tournament. We did not get the results we were hoping for, but we had two fairly solid performances at the tournament. We started EIGHT rookies in the first round and only carried a reserve bench of 5. By day two we only had 3 on the bench going into the consolation match.

This year we say goodbye to seniors Mackenzie McManus, Amanda Gardner, Katie Buzarellos, Ali King, and Genevieve Macaraeg. Mackenzie had a cracker of a season. She stepped up her leadership role and led the forwards from the front. Amanda’s season was plagued by injuries, but when healthy, she proved to have a stabilizing effect in the forwards. And as always, Amanda volunteered to take on an administrative role this season. Buzz juggled a pretty busy schedule but still made time to get to practice and was an invaluable part of the forward pack. She added much needed depth in the front row and finished the season strong. And Ali King, whose time with the Chico State WRFC was way too short. Senior rookie phenom, Ali King played a huge role this season. She brought much needed strength to the pack as a second row and led the team with turnovers at the tackle. She also spearheaded fundraising and did a magnificent job. Genevieve, another senior rookie, was finally granted her waiver and finished up the season strong. While typically reserved, out on the pitch Genevieve proved to be one of our scrappiest players. Why do they always wait so long to come out and play rugby.

We are looking forward to the start of our next season. We are only graduating a handful of players and we get to tap a few more that were unable to play this season. We will also be looking to add a 7’s team in the fall and competing in a few tournaments. Chico State Alumni Carrie White, who has been working with the Serevi Rugby group up in Washington will be coming down in the fall to hold a 7’s camp to kick things off.

After two years away from the national competition, the Chico State women have found their way back! After a few set backs early in the season, the women were able to pull it together and claim the final Pacific Mountain Conference seed by beating UCSB and Colorado State.

Come out and support  Chico State this weekend 4/21 at Stanford. Match time is 2:00pm. The Chico Rugby Foundation will hosting a pregame reception this Saturday at the eucalyptus grove immediately north of the pitch from 11:00- ~1:30.

We are excited to announce our annual FREE Youth Rugby Clinic. Please pre-register and guarantee you free t-shirt! Day of registration is available but t-shirts will be first come first serve. Hope to see you there!
chicorugby.org/free-youth-rugby-clinic/ ...

We want to give a BIG THANK YOU to all of you who came out and supported our organization. We had so much fun and can't wait to see you all next year! If you missed our slide show during the event check it out now! ...

This video is about Wheels, WIne & Ribs

Check it out!!!We want to give a huge shout out to 95.1 THE MIX for their generous support and sponsorship of our 2018 Wheels, Wine & Ribs event this Saturday, May 12th. Tune in tomorrow morning for the live interview with our very own Mitch Jagoe at 8:50AM!! If you haven't already got your tickets hurry and get them soon! You don't want to miss it! www.chicorugby.org ...

Chico Mighty Oaks 55- Sac Blackhawks 19. Nice win for our Men’s club today! Some of our Black Oak Alum on the pitch!! ...