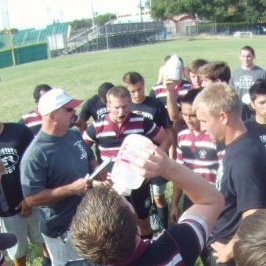 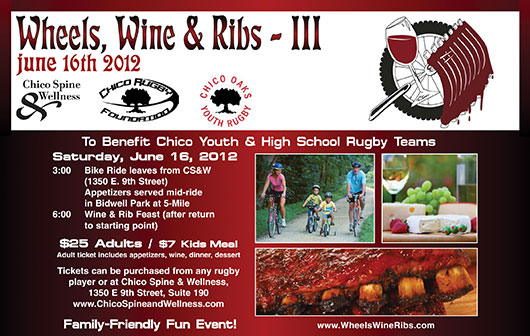 In keeping with this month’s Upgraded Living theme of patios, picnics and bike rides, Dr. Anderson and I decided to dedicate our article to an upcoming fundraiser Wheels, Wine & Ribs. This is the third year we have hosted this event and NEW this year we are turning the event into a fundraiser for Chico Youth Rugby and the Chico Rugby Foundation.

Sports were a key part of my childhood. I believe that youth sports helped keep me out of trouble and I learned important lessons about teamwork and self-esteem. With budget cuts in our schools, Chico sports programs have been feeling the squeeze. Youth, middle school and high school rugby is filling that gap. Lately, thanks to the Chico Rugby Foundation and its members, the youth rugby movement has grown with great success. In addition to the Chico Mighty Oaks men’s team and the Chico State men’s and women’s teams, there are now Chico youth rugby teams for kids ages 8 to 18.

To support the growth of youth rugby in Chico, Chico Spine & Wellness (CS&W) along with the Chico Rugby Foundation is putting on a great fundraiser this summer. Join us on June 16th for Wheels, Wine & Ribs III. This family friendly event starts with a leisurely half hour bike ride to 5 Mile recreational area where appetizers will be served. We’ll bike back to CS&W to meet any non-biking attendees at 6 pm and enjoy a fabulous rib & wine dinner with dessert. The ribs are so tender they fall right off the bone!!

The 2011 Annual Chico Rugby Alumni Weekend will be held on Saturday October 1st 2011.

Since the early 1900?s and throughout the many decades the sport of rugby has been played in the Chico community.  The community and University involvement with rugby have since woven itself a history of tradition and pride.  It is because of Chico’s proud rugby tradition that each year Chico Rugby Alumni hosts and celebrates its Rugby Alumni Weekend.  This event is a weekend of events focusing on the storied past of Chico Rugby Alumni.  It presents an opportunity for the community and university to display the sport that so many have enjoyed together.  Players of past teams reconnect and continue their ongoing relationships, all the while educating future alumnus.

Chico was reintroduced to the sport in the mid 1960’s as rugby was gaining in popularity on college campuses nationally.  As a club sport, athletes found the game challenging and exciting with a strong sense of tradition.  The current sport of rugby can identify its roots back to England some hundred years ago.  Rugby is not only known for its somewhat aggressive play, but also for its passionate commodore.  Commonly referred to as “The 3rd Half”, the hosting team invites the visitors to share in a social.  This is a light hearted affair where both teams let down their on-field personas and thank one another for the day’s challenge.  This is the bases of our Alumni weekend.

Please come be apart of the Chico Rugby Tradition and enjoy in sharing in Chico Rugby Alumni Weekend.

The Chico Rugby Alumni  are looking for you!  Signup for the site to stay in touch and active in Chico Rugby activities.

We are hoping to get contact info for all former Chico State Rugby players to make  our Alumni Weekend a success every year!

Come join us! Be apart of one of the best rugby events of the season!!! ...

Rugby at the stadium tonight!! ...

Congratulations to Chico State Alumni Megan Foster who gets the start at inside center for the Eagles. ...